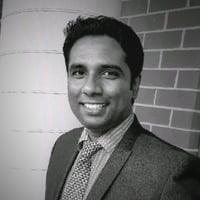 In this blog, would like to introduce you to a new feature called "Compare Sandboxes"; this feature, an extension to Planning Analytics Workspace’s existing capability, shall be available both on Cloud and in Local versions.

What is a Sandbox? (Jump to “Feature Explained” section if you are an existing TM1 user & know this well)

A Sandbox lets you create your own personal workspace, your own version where you can enter & store data-value-changes without impacting the base (actual) data.

While “sandboxing” has been around for some while now, users have been asking (almost demanding) for a “Compare Sandbox” feature.  This in essence is the possibility of comparing different scenarios (like best vs average vs worst) to help users analyse and drive better business decisions. This would also help streamline scenarios well before they are committed in the system.

As we now know, earlier versions of Planning Analytics (TM1) did not have an option where in users could compare different sandboxes, Now, users with entitlements to Planning Analytics Workspace (PAW) licenses can not only create personal scenarios in sandboxes but also view them side-by-side to compare and analyse the cause & its effect.

This was made possible as PAW considers Sandbox names as elements of dimension called Sandboxes (refer fig 1).

For illustration, you can now display your Best & Worst case sandbox scenarios next to each other in nested columns, and then, calculate the variance, as shown below.

In this example, we have two sandboxes Sri_BCase and Sri_WCase.

In Figure 2 Sandboxes are same as base data. BCase-WCase is on-fly calculation which gives variance between Sri_BCase and Sri_WCase. 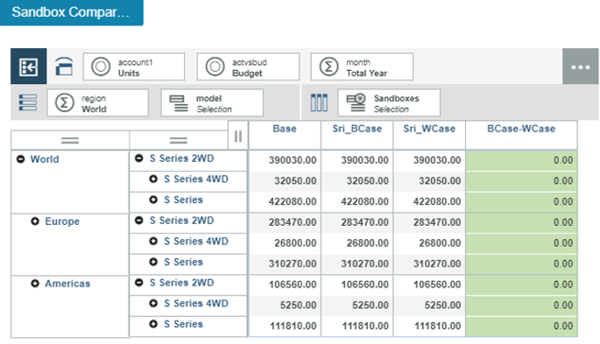 In Figure 3 Sandbox Sri_BCase, budgeted Units for S Series 2WD for world has been increased by 3%, Sri_WCase still holds base data. We can now see variance between Sandboxes in below figure. 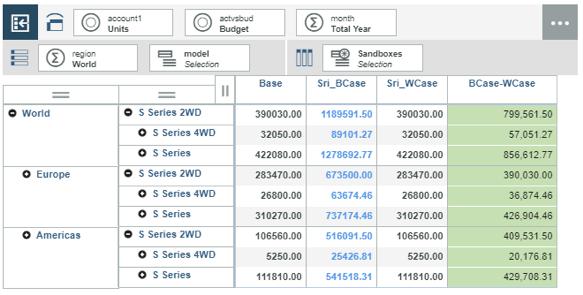 In Figure 4 Sandbox Sri_WCase, budgeted Units for S Series 2WD for world has been increased by 0.5%, Sri_BCase holds 5% increased data earlier. We can now see variance between Sandboxes. 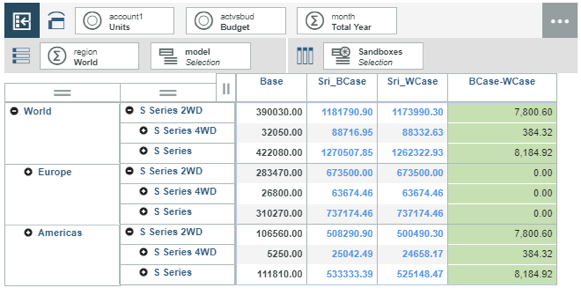 In Figure 5 this data can also be visualized using different graphs with in PAW. In this case Stack Bar has been used to Visualise data. 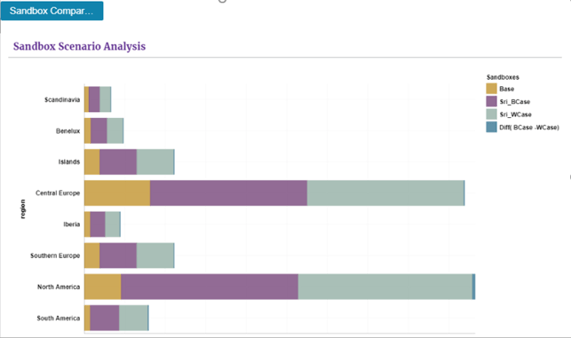 In Figure 6, we can also visualise the impact of these changes on other values like Sales, Price and other related measures.

As a part of its continuous improvement program, IBM basis its Client's business requirement and requests has been adding features to PA Workspace. IBM published "Compare Sandboxes" feature in PA Workspace in its version 2.0.31 release. Some of the features from earlier versions are Create Virtual Dimensions on fly, Calculation on the fly, Sorting, Ranking etc.

Hope you would have enjoyed reading this blog as much as I had testing this cool feature; stay tuned for upcoming blogs.

Octane Software Solutions Pty Ltd is an IBM Registered Business Partner specialising in Corporate Performance Management and Business Intelligence. We provide our clients advice on best practices and help scale up applications to optimise their return on investment. Our key services include Consulting, Delivery, Support and Training.